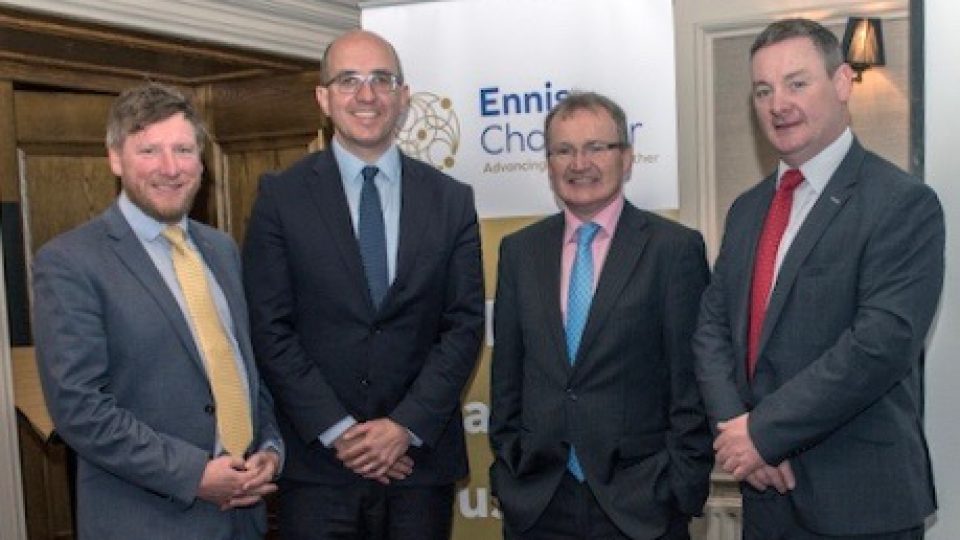 At a recent Ennis Chamber business breakfast organised in association with Carey Corbett Financial Solutions,  Jim Power, chief economist, Friends First, stated that Limerick-Galway, with Shannon and Ennis situated in between, has the potential to provide a real economic counter-balance to Dublin.

With regard to Ireland’s current economic climate he sounded a cautionary note, “Momentum thus far in 2018 is OK, but there are clear risks ahead.”

Amongst the global threats listed by Power are, “Brexit, the trade war between the US and China, global geo-political uncertainty vis a vis Russia, Syria, North Korea,  and ccyber-crime.”

In terms of direct  threats to Ireland, he pointed to housing, public services and pay pressures as key domestic issues. While he pinpointed Brexit as a key source of uncertainty with broad sectoral implications, he also highlighted Trump’s policy on taxation. However, it’s his view that, “ The tax agendas of the EU, notably led by France and Germany are more worrying.”

Within Clare he identified key opportunities for the local economy as being, hometo an International airport, proximity to universities and Institutes of Technology in Limerick and Galway, strong FDI presence and access to the Wild Atlantic Way.

According to Power, “Ennis enjoys strong connectivity, which is a positive.” With very ambitious plans in place for our nearest city Limerick, he predicted, “Limerick will be the driver of the region, and together with Shannon, Ennis and Galway has the real potential to provide a counter balance to Dublin.”

He added, “While undoubtedly Brexit poses challenges it also presents opportunities for the mid-west region.”
Diarmuid McMahon, president, Ennis Chamber in thanking Jim Power for his honest and forthright assessment of the Irish economy and in particular his observations regarding the mid-west, reminded the audience, that Ennis Chamber is working closely with neighbouring chambers to help drive the agenda for Limerick -Shannon-Ennis-Galway becoming a viable counter-balance to Dublin. “Together we have the population, we have an international airport, strong FDI, excellent third level institutions and motorway connectivity. We need to keep driving that agenda.”

He concluded, “Ennis Chamber is very grateful to Tommy Corbett, Donal Carey and all of the team at Carey Corbett Financial Solutions, a valued chamber member, for inviting Jim Power to speak in Ennis.”